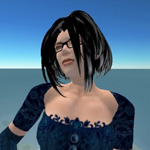 Tateru, can you tell me something about yourself, what is your fascination in your first and in your second life?

What I love most in life is… learning, I suppose. Teaching too, in that it’s almost impossible to teach without learning something new, if you’re paying attention to your students. I’m 41 years old. I’m autistic, with Asperger’s Syndrome, and this has led to a fairly disappointing chain of RL jobs and social encounters.

Is that your motivation to join “another” life?

Actually, my initial intention was to come here, and be ‘a nobody’. Just find myself a corner and thinker with the tools for my own education. You could say that I seriously failed that plan. Right now, I’m one of SL’s best known celebrities.

A couple of things. One – Second Life minimises my handicap. When we’re communicating in typed words, your thoughts are serialised – a little more cohesive and thought through. It makes you think a little more like me. None of the confusing tone-of-voice, facial-expression, body-language issues. And freed of that hampering factor, I discovered that I wasn’t the person I’d more or less resigned myself to being.

Can you state that the absence of physical presence in the 3D space is stimulating a creative process? perhaps self awareness?

I don’t… I don’t feel the lack of a physical presence. I feel /quite/ present actually, albeit in a space that has no physical existence. At once, I’m sitting in my chair, in front of a small monitor. At the same time, I’m on a lovely rug on a beach. Have you ever played a video game and had someone ask ‘which one is you’? And you point and say ‘That’s me!’ and you feel that connection. That’s you on the screen.

Regardless of whether the avatar is your own work, or the clothes, shape hair, tattoos are the work of others, it’s the culmination of your CHOICES.

What is your favorite place on SL and why?

Probably the Japanese Gardens in Albion, made by Kei Mars. I found them by chance, when I was new to SL. It was a quiet retreat where I could catch my breath. As you might have noticed, adapting to SL is a bit of a shock to the system. Initially it was the feeling of calm and peace – where I could get away and maybe try a few things without looking like a fool. After that, I always went back there when I was feeling a little overwhelmed, or troubled, or just needed a little break.

SL is still a very…primal, and fluid place. A landmark is here for months, then suddenly gone. Your home is surrounded by massive buildings, then a park, then cottages, then empty land, then shops, then something else – if only you’re patient enough to outlast it all.

How do you think of SL as a cross-media lab of innovation? Does it have that status already, is that going to happen in future?

Have you ever looked at the lawn in your yard (assuming you have one)? For the first 30 seconds, all you see is grass and dirt. Then a flicker of movement catches your eye, and you see an ant or a small mite or a beetle. Then another bit of motion, and soon everything you’re seeing is changing and moving. Alive, where it all appeared to be still.

I think people are starting to use Second Life that way. And Linden Lab are adding more features to support that over time. Second Life is real… it’s a /place/ where people do whatever they do. Think of it as a concert hall or a theatre. There are shows, and orchestras and things going on within it. People outside write about that, people broadcast things inside to the rest of the world, or the rest of the world is brought in films or live-videos or other mixed-media presentations. The line between Second Life and Real Life isn’t any thicker than the line between your local opera house and the city around it. SL streaming into the real world. The real world streaming into SL.

What do you think of the sex-animations in SL? Icons of a sexindustry or is that too easy …?

Sexballs? I think they’re alright, if you want some visual stimuli. I think words are far more powerful when deftly wielded however.

They were an /awfully/ popular device when they came out. They profoundly affected the culture of SL. They were – in some ways – very /obvious/ but like most obvious things, nobody had /done/ it yet. Now, as you say, they are everywhere.

The dutch media is a little bit confused right now on the topic. Is SL a sexbased community at this moment or not? What is your comment on that?

It’s not only the dutch media that’s confused about that. How would you characterise the real world? Virtually everyone there has sex. Many of them quite frequently. Is it a sex-based community? A lot more than Sex happens in SL. Commerce. A lot of education. But people will have sex anywhere they can. It’s the nature of people. And the addition of a little anonymity makes people a little bolder.

Mature regions are more popular and more numerous in SL because of their relatively unrestrained nature. But most serious businesses set up shop in a PG region.

How can serious companies reach their targetgroup, how can they generate traffic?

The trick is to provide something compelling to the community. And that means /understanding/ the community – and a few marketers may find that a chilly sort of notion.

They understand their customers and potential customers in a real-world, aggregate sense.

But here, you are CLOSER to them. They can wander over and talk to you.

What will they have to learn in doing research in the SL community?

Not to disrespect the population.

When commerce comes in, how will that effect SL (positive and negative)?

Well, we have a lot of it now. Dell have their new system where you can order hardware. Axel Springer (insultingly) is launching a tabloid. Nissan are here. Adidas. Toyota.

We’ve got our own businesses and commerce and news outlets, and all of that. RL companies are bringing in more. If this was 12 years ago, you might well have been asking me the same question about the World Wide Web. How will commerce affect it? After all, it existed before business ‘discovered’ it. IBM seem to be interested on researching, expanding and funding virtual worlds, though the suggestion is they will probably ultimately build something /other/ than Second Life. Several companies use SL solely as a conduit for dealing with their customers, in closed off areas. People don’t go in, people don’t come out. It’s a fair use of SL as a platform – like subscriber-only websites.

What about Second Life and the continuum of it … what is your vision?

Right at this moment, people are comparing the success or failure of virtual worlds like the race is mostly over. What we have right now are virtual worlds 20 years after birth, fresh out of college if you will, and looking for work. Which one will truly be successful? Maybe none of them. Perhaps only their children.

Second Life is going through some awful growing pains right now. We were a small town this time last year. Just short of 100,000 signups, and everyone more or less knew everyone else, or /of/ everyone else. Now we’ve passed two million signups, with thousands of people signing up every day.

The new people come in with all sorts of preconceptions and they’re very confused.

The system can’t handle the traffic?

There’s also troubles with the system scaling. Linden Lab expected large growth, but I think they were still taken by surprise by when and how much. They are still a struggling startup, looking to find their feet. I think…as long as nobody steals Robin Harper from Linden Lab, they will probably make it. I think – personal opinion – that she’s the single indispendable person at Linden Lab. She is vice-president of Community and head of the Community Development Team.

Linden Lab aren’t actually partnering with anyone, themselves. Instead, RL companies are partnering or hiring ‘MDC’s. Metaverse Development Consultants. Like Beta-Technologies or Aimee Weber Studios.

What would you people who enter Second Life for the first time, recommend to do in first steps of taking part of the community? And what places you advise them to visit?