Results from the 2003 study indicate that newsletters targeting business professionals boasted a 71 percent open rate, compared to 41 percent of e-zines that are directed at consumers. The open rate for B2B increased 2 percentage points from a 2002 study, while B2C (business-to-consumer) decreased from 49 percent.

B2B direct e-mail also fared better than the B2C counterpart: The open rate for a permission-based direct e-mail campaign that targeted business professionals was 52 percent, and B2C trailed dismally at 32 percent. In 2002, B2C direct mail had an open rate of 46 percent.

Opt-in News determines the open rate by dividing the number of opened messages by the number of messages sent. HTML e-mail allows e-marketers to track how many messages have been opened.

The highest open rate measured by Opt-in News was for B2B financial newsletters in Canada at 73 percent. Canadian B2B and Chinese B2C advertising-related e-mails followed with each having a 67 percent open rate. Unfortunately for e-tailers, U.S. consumer shopping newsletters had the lowest open rate ? 14 percent rate ? and the open rate for messages sent to U.S. IT professionals was less than half of that of their European counterparts. 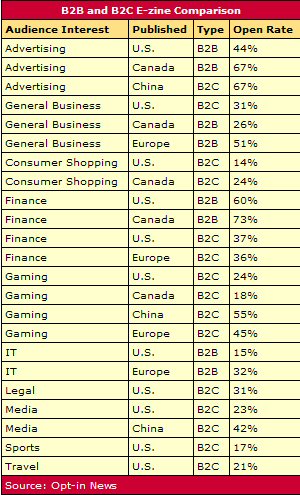 The decline in B2C open rates could be partially attributed to the influx of spam, causing e-mail users to delete, rather than read. A collaborative study between InsightExpress and UNspam, LLC of 1,500 online consumers revealed that the amount of spam in American’s personal inboxes has grown 76 percent in the last 12 months, making the process of checking e-mail a burden.

Spam has so infuriated e-mail users that 75 percent would support a national “Do-Not-Spam” registry and 78 percent say they would sign up should such a registry become available.

“While the survey reconfirms that spam is a nuisance for consumers, the emerging problem we’ve found is that unsolicited e-mail creates real liability for businesses,” said Matthew Prince, CEO and co-founder of UNspam LLC.