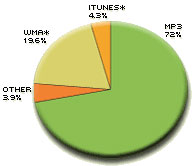 According to NPD Group, the percentage of MP3-formatted songs in digital-music collections has slid steadily in recent months, down to about 72% of people’s collections from about 82% a year ago. NPD researchers estimate that there was a net loss of about 742 mln MP3 files from U.S. hard drives between August 2003 and July 2004, despite people acquiring blns of songs from file-trading networks and their own CDs. By contrast, Windows Media files showed a net gain of 537 mln files on US hard drives. Windows Media market share is at 19.6%% today. Apple’s iTunes AAC has gained 4.3% of the hard-drive share in just seven months.